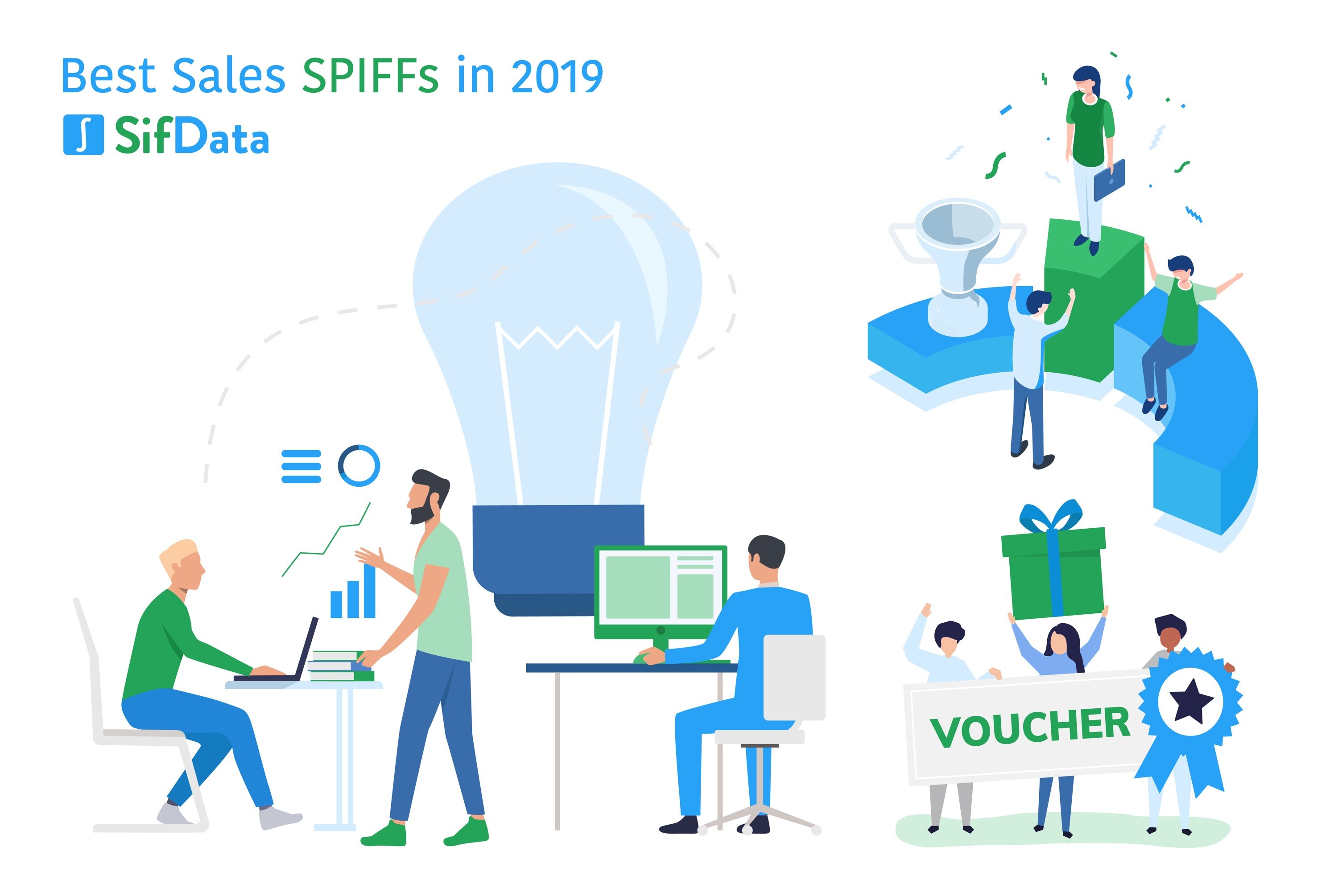 With employee disengagement levels at a high (68% of employees are either not engaged or are actively disengaged in their jobs), need for sales SPIFF programs are on the rise. Although sales SPIFFs are only short-term programs for incentives, they are a very effective driving force of many successful businesses and companies. This is because sales SPIFF programs are a great way to instill enthusiasm and fun in the workplace. In fact, well-implemented SPIFF programs can increase sales by as much as 27%.

To add, there has been a noticeable drop in the percentage among sales representatives attaining sales quota. In 2016 only 50% of sales reps attained full quota, a 13% drop from 2011. It is expected that more B2B salespeople will fail to meet quota in the coming years.

Nonetheless, while sales SPIFFs generally sound like a good idea, they can have unintended consequences. If SPIFF programs are utilized incorrectly, they may fall short of their intended purpose.

What are Sales SPIFFs?

Sales SPIFF programs can promote various types of incentive rewards. Most commonly, companies will set SPIFFs to close the gap in pipeline, opportunities or any metric the business needs to improve.

SPIFFs are widely adopted because there’s an assumption that they work. However, there is no hard data one way or the other. Intuitively, using a carrot to incent behavior works far better than a stick, but sales managers aren’t psychologists. They rarely understand what drives behavior and motivation. Far too often, we’ve seen SPIFFs fail to move the needle – or in worse cases – decrease performance.

What Type of SPIFFs Work Best?

Any company that has SPIFFs will generally give them out at the end of the month/quarter/year and throw in extra cash, accelerators, steak dinners, etc. at reps to encourage them to work harder. What this fails to take into consideration is the fact that many people are motivated by more than cash or a nice dinner. People tend to be generally incentivized by four things in life (and sales reps are no exception) — status, access, power, and stuff.

Some people find value in having ‘better status’ than other people.

The reason this works is because it highlights people’s natural desire for praise and recognition. For many, this can be even more attractive than a short-term cash injection because it can set them up for a promotion and advancement if they’re seen as a consistent top performer.

Status is far from perfect, and there are many individual contributors who shun the limelight and prefer to keep to themselves. Many consider status to be a negative and will actively avoid winning a SPIFF that would force them to stand out from the crowd.

Access in this case refers to the opportunity for exclusive access to information, support or resources that others do not possess.

Examples of these could be:

Access can have drawbacks as well. Often, reps who are motivated by money or status will feel as though these are cop-outs from managers looking to set a SPIFF but not actually pay for anything tangible. This is because first pick of sales engineer doesn’t cost the company anything.

Power
Another lever a manager can pull to drive behavior is power. This concept means giving the rep the power to enact change. It makes sense that those who are the most successful and hardest working should be the ones to drive change and improve processes. Giving a rep power does not mean that they control an individual but that they have control over a given change or process.

Some examples of this are:

With great power comes great responsibility. Many sales reps have never been in a position of power, and just because they’re a top performer doesn’t mean they have the vision required for a project as impactful as compensation or how your company sells.

Stuff
Stuff is by far the easiest and most common SPIFF teams use today. It’s simple for managers to go on Amazon, snag a few gift cards and dangle them in front of the reps. The tricky thing for managers to do is to choose the incentive that will drive the behavioral change you’re looking for.

Our recommendation on this is to give things that make reps better at their job. Rather than giving them a gift card to Amazon, give them a set of choices of items that make them better at their job. Maybe it’s a set of noise cancelling headphones that make their sales calls better, a new ultra-wide monitor or a Headspace subscription to help them meditate and focus. The only limit on stuff is the sales manager’s imagination.

Drives quota and sales quickly
Sales SPIFF programs are a very effective driving force for business and companies for meeting or even exceeding sales goals in a short period of time.

Increases employee retention rate
Launching incentive programs not only motivate and engage the sales team but also help to instill a fun and competitive atmosphere in the workplace.

Only impacts short term behavior
As companies, we want our salespeople to do a remarkable job all the time, not just at the end of the quarter.

Sandbagging
SPIFFs can create a culture where reps sandbag on closing deals early because they know a SPIFF is coming.

Motivation
If a SPIFF is structured in a way that favors certain reps it can be a huge de-motivator for other reps. For example, if the SPIFF is for whoever closes the biggest deal in the year, the SMB team will be completely turned off and the Enterprise team will be extremely engaged because the SPIFF favors them.

Fraud or misuse
Companies should watch out for possible fraud or misuse when implementing SPIFF programs. Companies and businesses should have associate third party validation tools/software that catch or filter fraudulent claims.

Unpredictable program
SPIFFs should be random. They should come out of nowhere and when no one expects it. Most commonly you’ll see a sales leader stand up on the 23rd of December and say: “Whoever closes the most deals between now and the end of the year will get X” and year after year reps will hold back on deals knowing the company was going to do this. This would lead reps to close all of their deals at the very end, effectively gaming the system. A more impactful method is to run a SPIFF in Q4 saying: “Who can close the most deals that are generated from now until the end of the year?” Reps can’t know that this is coming and will rarely hold off on getting new deals going. This forces everyone to start from scratch and on an even playing field.

Attainable for everyone
If you only reward achievers 1, 2 and 3, you might be creating a culture of competitiveness that could demotivate people. We recommend creating a SPIFF that is based on surpassing a specific hurdle. Rather than deciding that President’s club is for the top 3 reps, it should be available to anyone who attains > 100% of their quota. This means, in theory, anyone could attend President’s club which creates a culture of support rather than competitiveness and sniping.

Tie to other program
Tying SPIFFs to promotion and advancement is one of the best ways to motivate people to do their job better, especially among entry-level employees. They’re yearning for advancement opportunities and to know that they’re making progress. An easy to way to kill two birds with one stone is to require that they earn at least two SPIFFs before they’re eligible for a promotion. This will incentivize them in both the short and long term.

Make Success Clear
Opaque rules, carveouts and unclear incentives will create a scenario in which no one understands what actions they can take to be closer to earning the SPIFF. If your top goal is to drive behavioral changes, you need those good behaviors to be extremely clear. “Generate 25 meetings by EOQ” is a clear goal and every rep should know what to do to make that happen.

Controllable program
In addition to success being clear, we recommend that SPIFFs are also tied to things the rep can control. For example, “Close 2 deals above $100k” is clear as a SPIFF but “Get at least three prospects to attend a conference” is far outside of the control of a given rep.

Team SPIFFs
Team SPIFFs seem like an obvious way to get everyone pulling in the same direction. Unfortunately, these can seriously demotivate top performers while also rewarding bottom performers. If a person blows their quota by about 3X but the team comes up short by $1 on a multi-million dollar goal, you’re going to find that top performers are going to be disengaged and frustrated.

All or nothing
Having only one person as the winner of the SPIFF creates a competitive situation in which reps who clearly cannot win will begin to back off or even subvert others. You want a culture where reps help each other succeed, and creating a zero-sum game is a surefire way to create a toxic culture.

Everyone who participates in the program earns rewards. Example:

Auction/bidding using earned incentives
One company would give out fake currency at the end of every week for a variety of metrics (meetings books, calls made, etc.) that are all completely in the control of the SDRs. At the end of every week, there would be a putt-off where reps could take a long putt and double their money. At the end of every quarter, there would be an auction where things are auctioned off. Based on the amount of money earned, a sales rep could bid on these things. This would create a culture where everyone feels like they are making progress, and the auction would be a fun way of unwinding at the end of a long hard-fought quarter.

The SPIFF runs for a set period of time

President’s Club
EOY President’s club is a great way to thank your top performers. An easy spin on this is to base it off of quota attainment rather than stack-rank.

Are sales SPIFF right for your business?

SPIFFs should be seen as a tool with a given purpose. You don’t walk around with a knife in your hand because knives are useful under certain circumstances such as cooking, but can be dangerous in others. When employed in a smart, consistent way you should see huge results in driving positive behavior among your team. If you’re finding that your team is behind on quota or has a short gap to fill, we recommend using SPIFFs. If your team is generally demotivated, untrained or unwilling to do their jobs, a SPIFF isn’t going to right that ship.