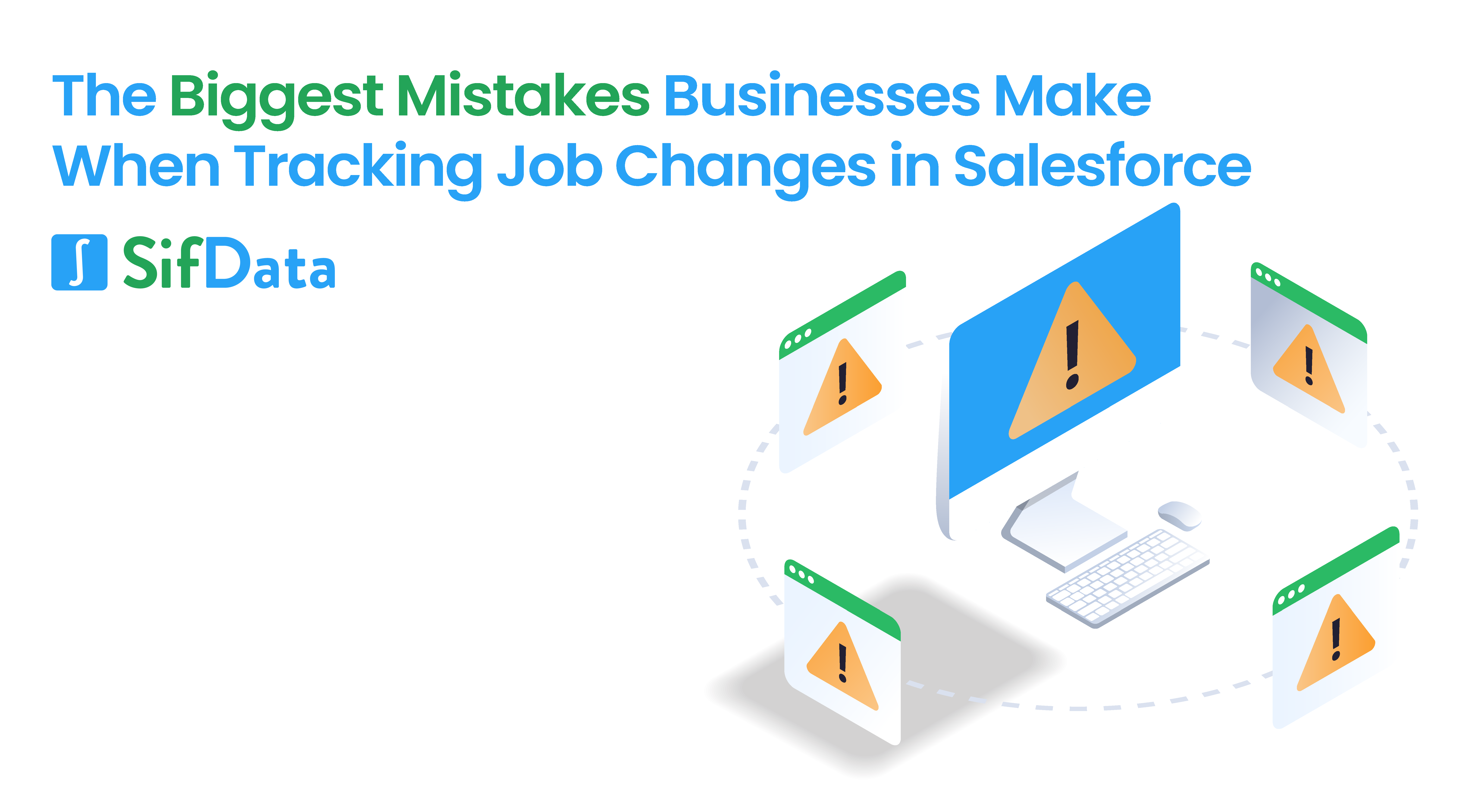 Tracking job changes from alumni customers and net promoters is the best way to drive pipeline, cut churn, and close deals faster. That said, after helping customers track a few million job changes, we’ve seen some common mistakes that we want to help you avoid.

Almost every company with an Outbound Sales team has at least tried using jobs changes to drive meetings or pipeline. Reps are resourceful, and seeing their peers close a deal quickly with an alumni customer can change their behavior. However, without a defined process for who to track, what to do if a job change is found, how data in SFDC will be updated, and what message to use, you’re setting your reps up for a lot of up-front investment for only short-term gains.

We once heard a prospect on a call use the term “haphazard” to describe their efforts to use job changes to drive meetings. They’d seen success and reps were trying to pull it off, but ultimately their process didn’t scale, and so they gave up.

Defining clear processes for your team that you can measure against is the most important step we see customers take when implementing SifData to track job changes.

If you’re an SDR or Account Manager, you’ve probably heard the phrase, “If it isn’t in Salesforce, it doesn’t exist.”

This applies to any effort to monitor contact job changes at scale. If you don’t have the entire process tightly integrated end-to-end in Salesforce, you may as well not try it (as our customers with the “haphazard” efforts experienced).

When a customer or prospect changes jobs, you need to notify the right rep at the right time. Your prospect will often move to a new account with a new account owner, and if job change tracking lives outside of Salesforce, you’re going to end up with a big mess.

One of the questions we ask customers is, “Who do you want to track?” This can be a tricky decision. Sales teams have seen fast-moving deals from former customers moving jobs, but they don’t necessarily know how to prioritize which contacts to track in order to get the most value out of SifData.

Every company thinks about things different, but we tend to think of prioritizing contacts with these three phases:

If you track 1,000 contacts, you’ll find that about 40% have moved to new companies and 3-5% change jobs every month. The majority of those contacts will move to new prospect accounts, but many move out of the industry or retire. Because of that, it’s important that you periodically prune the list of contacts you’re tracking and add new people over time.

At SifData, we found that many contacts needed to be removed from tracking, so we created a status on SifData Alerts called “Drop.” When a rep selects that status, it removes the contact from tracking and moves them to a holding account, in addition to marking them as “No Longer There.” By doing this, we retain the email history and their links to any previous opportunities while keeping our accounts squeaky clean.

Account Managers and BDR’s looking to break into accounts are looking for any piece of intel they can find that would give them an opening. One of the best openings you can nab is when an account hires a new executive decision-maker, but what if that exec is new to the industry? Tracking known contacts is critical, but everyday contacts you’ve never heard of are moving in and out of your target market. What if you could know when a key decision-maker is hired at a target account?

SifData Prospects allows you to flag key accounts and define target personas. When a new exec is hired in that role, we’ll push them in as a prospect tied to that account. This ensures that you’re not caught flat-footed when a new decision-maker comes onboard.

Nearly every company doing enterprise sales is using an account-based approach. They have a defined list of target accounts in a given territory that, as a rep, you’re focused on selling into. And when contacts move from one account to another, you need that reflected in your process. The contact should be moved to the new account so that the email and opportunity history of a given contact carries over into the new account.

What we’ve seen some customers do, with varying degrees of success, is leave the old contact in place and create a new lead. The team then has to convert that lead to the proper account, which again requires manual effort. If you’re doing account-based selling, avoiding leads tends to make the most sense.

7) Relying on a set-it-and-forget-it mentality

Any tool that can move the needle for your team will need maintenance and process improvements. If you assume you can install a package, click a few buttons, and never think about it again, you’re setting your team up for failure over the long-term. A process that can drive pipeline the way automated job changes tracking can is worth a real investment of time from reps, operations, and management. Anything short of that will be wasted budget.

Don’t kid yourself. An enterprise solution to solve problems as complex as pipeline deficit, opportunity quality, and customer churn is going to take time and resources to implement and adopt. At SifData, we’re fortunate to have seen hundreds of implementations, and we can help guide customers on best practices to help them avoid the common mistakes we see customers make.

If you want more information on how SifData can optimize your pipeline, reach out to us using the Contact Us option down in the footer. We look forward to hearing from you!

« ACCOUNT BASED MARKETING: 6 OF THE BEST ABM TACTICS TO DRIVE YOUR SALES PROCESS